This is a good question. From my own experience, there is no need to break in a Gong before you start playing it, but, a Gong will go through a period of breaking in as the sound and metal settles.

This breaking in has 3 distinct phases:

The bronze, or nickel-silver, that Gongs are made of, has a crystalline structure that tends to settle over time. According to Billy Zildjian, from the SABIAN cymbal company, talking about cymbals, “The internal molecular structure has a tendency to float within the metal of the cymbal. After some time the molecules actually begin to bind together as the metal settles.” (from Modern Drummer magazine, November 1983) This is thought to change both the tone and the feel of the metal.

There is also some belief that playing the cymbal or Gong helps the metal settle. There are various stories of jazz drummers, most notably Elvin Jones, playing their new cymbals for hours, by rolling on them with mallets. This was done to break them in and finalize their sound. I don't advocate just rolling on your Gongs for hours and hours, but I do believe that you must play them. Don't just leave them sitting in the corner, or packed away in their bags. Play them. Play them everyday if possible. 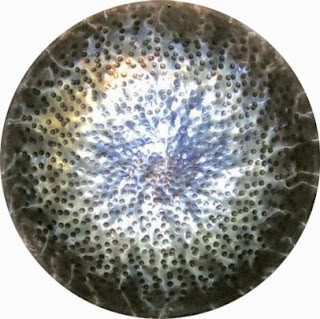 From personal experience, I can say that the Gongs do settle in and the sound changes over time. For example, back in early 2005 I received a set of 3 Gongs (Water/Volcano/Wind) from Michael Paiste in Switzerland. While I liked them, 2 of the Gongs I had mixed opinions on. They felt very stiff under the mallet, and the sound was stiff also. But I played them all the time. I worked with them. In November 2005, I did a short concert/clinic tour and was playing them everyday for about 2 weeks. At one performance, the sound seemed to change dramatically, as did their response to my playing. They opened up, revealing some amazing tones. I was so excited after the performance that I called Michael Paiste up to tell him how great the Gongs were now sounding!

2) Learning how to get the sounds you want.

It takes time to understand a new Gong. It takes time to know what mallet to use, and where to strike it, to bring out a specific tone/sound. It also takes time to develop a touch for playing each Gong. This again comes down to working with them. You need to play them in order to get to know them. You can't expect to just take them out of their bags on weekends and make magic happen. Magic only happens through hard work.

I've had some of my gongs 10, 20 or more years, and I'm still learning how to play them! They still yield up new sounds, and it's a continual adventure of discovery. And different mallets/strikers/implements all react differently with the Gongs. So again, it's a lot of hard work that I put into being able to learn and control each Gong.

3) Your ears changing over time.

A new Gong sounds strange, sounds different, sounds new! It takes time to get used to its sounds. So a part of this breaking in is both our ears and minds getting used to the new sounds.This again is another reason to keep playing your Gongs. You want to develop a relationship with each one. You want to know it well. And part of this is developing an aural relationship. I know I could pick my Gongs out of a room full of Gongs just by their sound alone. I know them intimately. In fact, when I add a new Gong I match it up to the sounds of all my other ones that I carry in my head. 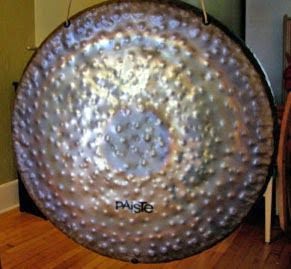 I have a prototype Gong that I got from Paiste, and for years I just didn't like it and didn't use it. It was too sensitive under the mallet and the tone was harsh, but I kept working with it. Gradually I got to know it, got to learn how to control it and what mallets would yield pleasing tones. I started bringing it on Sessions last year, and now it's become one of my favorite Gongs. It has some amazing sounds that none of my other Gongs produce. I could've just given up on it, or sold it, but I kept working with it, learning it, getting it to settle in. That was time well spent.