Showing posts from January, 2018
Show all

In a previous blog, It's Time To Meet Your Maker , I looked at some of the independent gong makers who are out there crafting beautiful and fascinating instruments. Today, I'd like to look at some more of these artisans. But first, I'd like to feature a quote taken from the very lengthy Facebook conversation that took place about my blog post. This comes from Trey Wyatt, of The Gong Shop in San Francisco:   I find it interesting that Thai/Burmese gongs seem to rarely make it into the mix of a gong players setup. Some people are so sold on Paiste or Meinl for their "tuned gongs" which possess nowhere near the pure fundamental of a properly tuned and voiced Thai/Burmese gong. 9 times out of 10 when customers come into my gong showroom in San Francisco, very adamantly saying they "only" want to hear Paistes gongs (because that's what their gong master told them to buy), they walk away with a large wind or chau gong because they prefer the sound and
1 comment
Read more

The 'Go Fund Me' Trend Of Begging For Money 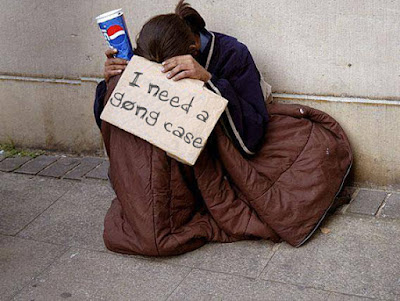 This whole 'Go Fund Me' thing is really getting out of hand. I just saw a fundraiser for someone trying to raise $500 so they can buy a 'flight case' in order to fly with their Gong. WTF? I mean, really? This is ridiculous.  Why not do like everyone else on the planet and save up your money to buy it? In their 'Go Fund Me' campaign, they brand themselves as a Gong Master , and state that healing others is their mission. Yet they are begging for money to buy a gong case. What they want is a molded plastic Humes & Berg case. I just bought one of those a few months back. I'm not rich, but I paid for it out of my savings. I also bought an actual flight case years ago.  My ATA approved Flight Case for a 32" Gong I paid for 15 years ago. A Humes & Berg Molded Plastic Gong Case like I just bought. There are currently 3 Gongs I'm looking at buying. I'm saving up my money over time to get them. I'm not begging the gener
Post a Comment
Read more
More posts