January 31, 2018
In a previous blog, It's Time To Meet Your Maker, I looked at some of the independent gong makers who are out there crafting beautiful and fascinating instruments. Today, I'd like to look at some more of these artisans. But first, I'd like to feature a quote taken from the very lengthy Facebook conversation that took place about my blog post. This comes from Trey Wyatt, of The Gong Shop in San Francisco:

I find it interesting that Thai/Burmese gongs seem to rarely make it into the mix of a gong players setup. Some people are so sold on Paiste or Meinl for their "tuned gongs" which possess nowhere near the pure fundamental of a properly tuned and voiced Thai/Burmese gong. 9 times out of 10 when customers come into my gong showroom in San Francisco, very adamantly saying they "only" want to hear Paistes gongs (because that's what their gong master told them to buy), they walk away with a large wind or chau gong because they prefer the sound and price.

There are so many different Gongs out there, besides the standard Paiste/Meinl nickel-silver ones. Don't be afraid to look at something different. Most of these Gongs/sounds are very complimentary to the Paiste/Meinl ones. Check out some Chinese Chau, Wind, Heng and other types of Gongs. Check out some Thai, Vietnamese, or Gamelan Bossed Gongs. Mix things up with various Asian Gongs and specialty Gongs from the independent Gong makers out there.

My previous blog post featured a variety of custom gong makers from around the world. Of course, I just didn't have the room to put  all of them in one blog post. So here is a Part 2, featuring some more wonderful gong makers you should check out and buy their unique instruments from.

Based in the UK, Michael has been making fascinating Gongs out of stainless steel. They often feature beautiful artwork/engraving on the face. Stainless steel has its own unique sound that is very different than nickel-silver, or bronze.

Based in Italy, WOM is another company using stainless steel. They have their own special designs, including a fantastic rectangular Gong. 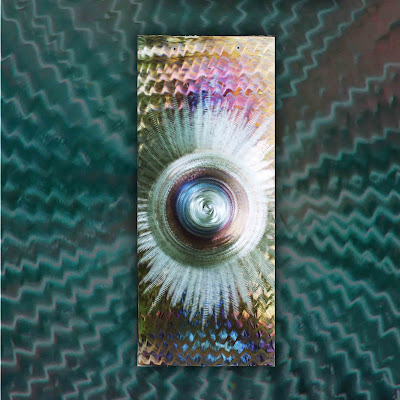 Based in Germany, Martin has been creating a wide variety of Gongs, bowls, Trigon Bells, bell plates, and other amazing percussion. The Trigon and bell plates are available in Planet tunings.

Broder apprenticed under the legendary Paiste Gong maker, Walter Meyer. When Walter retired, he became the Gongmaster until leaving Paiste. He formed his own company and makes the Gongs for both Meinl and Olli Hess Gongs, as well as his own line of Gongs. 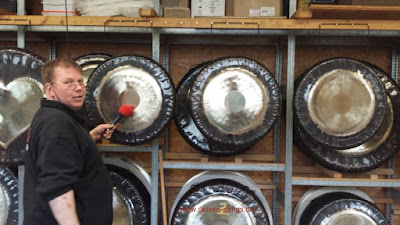 Broder with some of his Gongs. Photo from Oetken Gongs.

From out of Poland comes Tone of Life. Lead by Tom Soltron, they put their own spin on the classic nickel silver Gong sounds, offering a series of Element Gongs. 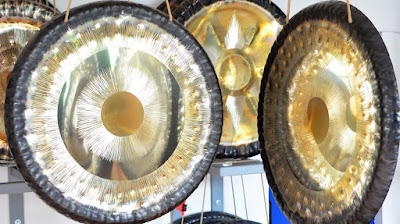 Photo from Tone of Life.

Where Do You Start?

Check out all the linked websites in both blogs. Many of them have sound samples and/or videos, so you can get an idea of what things sound like. Also look around for friends or acquaintances who may have something different you can try out. And don't be afraid to ask questions of other Gong players.