Adjusting Your Sound To Fit The Space

September 25, 2018
I have seen/heard some people who seem to play their Gongs at the same intense volume no matter where they are playing. Small room, medium room, large room—they play the same. This also goes for the type of room, whether it's a very lively reverberant space; or a dry, dead sounding one—they play the same. I attribute this to inexperience, and perhaps not understanding the nature of sound and creating music.

I've played thousands of different spaces over the years, and the most important thing I have found, is to learn how to judge each room/venue that you play in for its acoustic properties, and how your instruments will react in there. Now I'm talking mostly about playing with no mics or sound amplification. Using a sound system changes things a lot. But in a completely acoustic environment, you need to be responsible for your sound. This is especially true if you want your listeners to have a great experience.

You need to be responsible for your sound

Tonight, I finished the 3rd of 3 different sessions in a row. Each night presented me with a completely different acoustic space to work with:

Venue #1 - Outside in a large monolithic stone circle—think Stonehenge type of giant stones. While being outdoors, the sound was very open, yet the stones created a rather reverberant space. Even with no amplification, all sounds were heard clearly throughout the circle. While at times I played loudly, for the most part I played with restraint, as I was playing with 2 unamplified flute players, and a crystal bowl player. 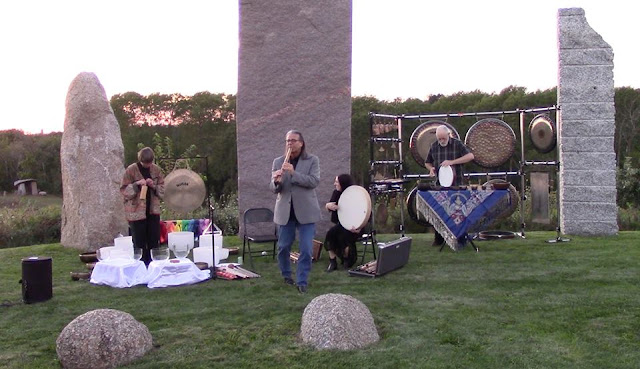 Knowing that this was an outside performance, I brought along hard mallets, both rubber and cord wound, for playing the bowls and bells. I was thinking I would need more attack and projection to get the sound across outdoors. But the stone circle had amazing acoustic properties, where all the subtle, quiet sounds were easily heard within the circle. I didn't need the harder mallets and used my usual medium ones.

I always bring a selection of soft and medium mallets to adjust to the changing acoustics of each venue. Sometimes the medium ones are a bit too harsh sounding, so I'll use the soft ones.

For the large Gongs, I found no need to bash them to get the sound across. Compared to most other Gong players I'm familiar with, I tend to play much quieter. This has to do with my interest in the subtle sounds, overtones, and harmonics that the Gongs (Bowls & Bells too) are capable of. One of the reasons I stopped playing in rock bands, is that all the beautiful, subtle sounds I would hear while practicing drums by myself, where completely obliterated in a loud, amplified band situation. So I decided to embark on playing unamplified in both solo and group situations.

Venue #2 - a medium boxy Yoga Studio with a high ceiling, hard laminate floor, hard walls, and a rock wall behind my set up. The room was extremely live and reverberant. There was no need to overplay anything, as the sounds came through. I actually used the reverb to my advantage, letting sounds ring longer and float in the air. 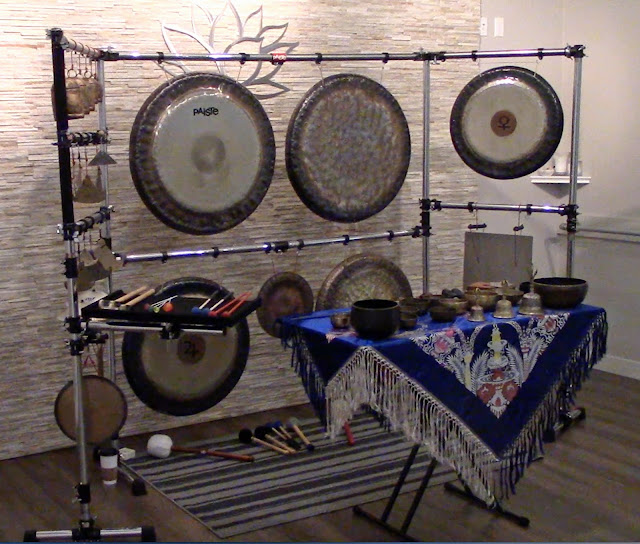 Stone wall behind my set up.

And this is something I like to do. When the room is very reverberant, or has a long echo, I incorporate that into my playing. I listen (this is always the key to anything I do) to the sound around me.

With this studio, I walked around before any people were there, clapped my hands, and listened to how the reverb was in different parts of the room. I also played the large Gongs and then walked away from them, listening as I went. Sometimes I'll carry a small Gong (22-24") or Bowl around to hear how the room reacts. I'm listening for hotspots and to hear how the room reflections react.

In some cases I'll find that one of the Gongs seems to activate the tuning of the room itself. This can make the whole room come alive and amplify certain frequencies. Now depending on what the resulting affect is, this can be a good or bad thing. I've played in some venues where I've used this to my advantage, letting the whole room become an active participant with the sound, creating a deep, sub woofer type of affect. This can work well with the right low frequencies. At other times, I've found the affect to be over bearing and may not even use the Gong that causes it at all.

It's also important to realize that once you have a room full of people with blankets and Yoga mats, that the acoustics can change dramatically. Again, this is where you need to actively listen to what is going on around you as you play.

Venue #3 - A small Yoga studio in an ‘L’ shape with a low ceiling (8’/2.44m or so), carpeting, and varied walls. The room was very dry and the sound didn’t carry, but it was very present, just hanging there. I adjusted my playing some to concentrate more on harmonics/overtones on the big Gongs, and was careful not to overpower the room and the people, as the sound seemed to be very in your face.

I think it's interesting that with these 3 different sound spaces, I used the same mallets, but I adjusted my touch and technique to fit the spaces. And this is where practicing your craft becomes important. You can't pull out your instruments once a week for a session and expect to have control over what you are doing. You need to constantly work at it. You need to practice and learn. Even star athletes practice and work out to stay in shape and keep improving. It should be no different for Gong/Bowl/Bell players.

And it's the same for rooms. You need to pay attention to the sound in each space you play in and learn how your instruments sound and react in them. Overtime, you can build up a knowledge base that will help you adjust to every type of sound space you play in. But you have to put in your time and effort.

How Loud is Loud?

I have found that sometimes no matter how you play the Gongs, that some people will say it was “too loud,” while others will say, “it wasn’t loud enough.” How do you determine what is loud enough for each room? I read where another Gong player stated that,

“As gong players, we are the most exposed to the volume of the gong. If we can take it, they should be able to too.”

I find this attitude rather immature and irresponsible. I also find that many people simply overplay the Gong thinking that sheer volume is a positive factor.

I prefer to be on the “not loud enough” side of things because I fail to see any need to play the Gongs so loudly. I know some people who literally bash the shit out of their Gongs, which I don’t understand. I have found that subtlety works much better at reaching people, than hitting them on the head with a hammer.

Do your homework.
Be responsible for your sound.