November 12, 2018
I think it's important for all Gong and Bowl players to understand how the people at their sessions perceive the sounds and vibrations. It's often extremely different than how the player perceives things.

One important idea is that the player is right there in front of the instruments. This can create a sort of proximity effect, especially with larger Gongs. With a very large Gong, you may be standing right in front of it, but the lower frequencies are not opening up until they are past you. One thing to do is to strike your Gong, or have someone else strike it, and back up slowly from it. Notice how the sound changes as you move away, not just in decreasing volume, but in frequency. Listen for hot spots where a certain low frequency jumps out.

I experienced a great example of this when I played for the grand opening of the Memphis Gong Chamber. In the main room, they have a beautiful 84" Paiste Symphonic Gong. I was able to isolate multiple hot spots in the room where different frequencies were more apparent. For example, standing 6' away you could predominantly hear one frequency. Standing 10' away, you could predominantly hear another, deeper one. 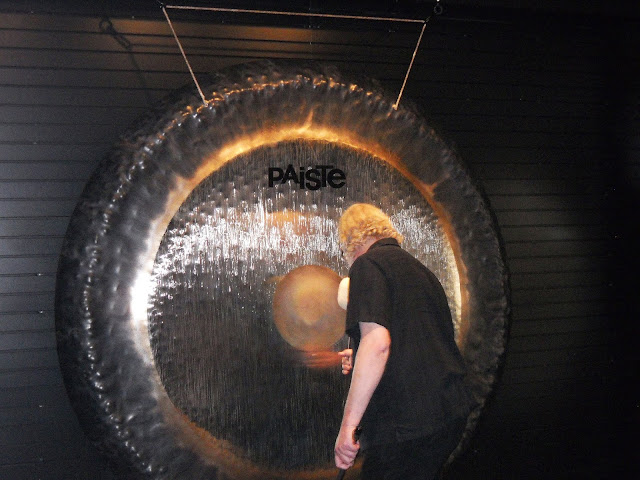 For a basic example, let's look at a sine wave. In the illustration below, the distance between A and B is 1 cycle of the wave (as is B to C, and C to D). In high frequencies this can be inches, or even less. We hear these frequencies right away. As the frequencies go lower, the length of the wave gets longer, to the point that very deep sounds have waves that are many feet long. Thus, while standing in front of the 84" Gong, I could feel the deep waves in my body; up close, but I didn't really hear them. That's because the first cycle of the wave (A to B) did not end until it was past me. When I stood in the room at points B, C, D, etc., there was a predominant sound because these points were the completion of the cycle. This is not to say that you couldn't hear the low frequencies anywhere else, it's just that these were hot spots.

Now this is a very simplified explanation, and not everyone has an 84" Gong producing sub tones, but there can be low frequency hot spots with 40" or similar sized large Gongs.

Another thing to watch for are room resonances. All rooms have certain frequencies they react to. It is possible to have one (or more) of your Gongs produce a frequency that reacts with the room and is actually enhanced, standing out more than other sounds. Sometimes it just seems louder. Other times, it seems to become the room, appearing to emanate from all over, not just your Gong. Sometimes, as in the sine wave example above, these will exhibit as hot spots only in certain places in the room. That's why, if you have the time, I think it's important to play your Gongs and walk around the room, listening to the acoustics and how your sounds react in the room.

Another important thing to consider is the sound from the positioning of your Gongs on a stand. This became very apparent to me when I recently switched the position of 2 Gongs, moving one from the top tier to the bottom, and moving the other from the bottom to the top. Because I stand up, the top Gongs, that are at my ear level, sound more prominent/loud when I play them. The ones on the bottom row, which are far from my ear and send their vibrations straight out, do not sound (to me) as loud as the top ones. Thus it's tempting to play the bottom Gongs louder so that they match the volume of the Gongs in the top row that I'm hearing.

The problem is that most listeners are lying on a yoga mat on the floor. Thus their ears are more in line with the bottom row of Gongs. So if I play them louder in order for me to hear them better, I may actually be playing them too loud for the people lying down on the floor! 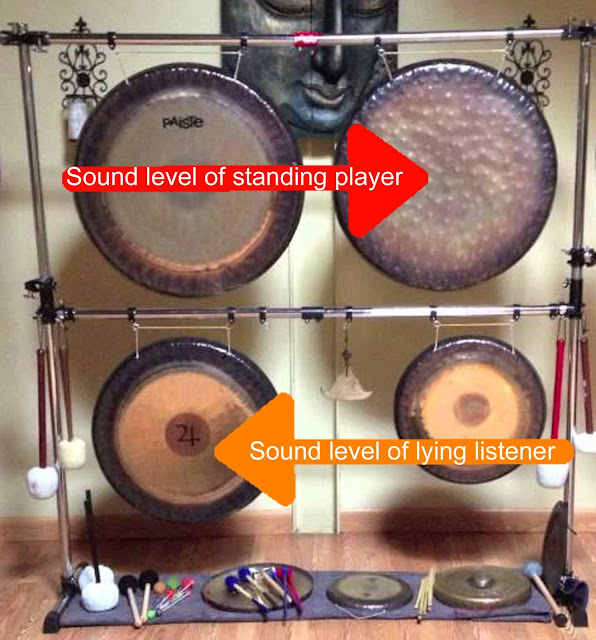 One solution I have found is, when possible, to bend over when I'm striking the lower Gongs in order to check my sound/volume. I played a duo gig last night where some of the music was very spacious and flowing. Although it was a concert, I still would bend over at times when I played the lower Gongs just to get a feel for their volume.

This is another reason I feel it's important to practice with your set up. You need to learn how hard to strike your lower Gongs in order to produce the volume you want and not over or under power things. Guess work just won't do.

Be responsible for your sound.