I hope if an any next article you could teach a little bit of characteristics of sounds. Concepts like hz, pitch, tune, frequency, overtones, harmonics, because I don’t know a lot, but usually I read stupid things like, "Chinese gongs don’t have harmonics" etc. Thanks.


This is a really great question, as I suspect many people don't really know much about these concepts. So let's take a closer look:


The hertz is the derived unit of frequency in the International System of Units and is defined as one cycle per second. It is named for Heinrich Rudolf Hertz, the first person to provide conclusive proof of the existence of electromagnetic waves. Hertz are commonly expressed in multiples: kilohertz, megahertz, gigahertz, and terahertz. (from Wikipedia)


Hertz, abbreviated as Hz, is the measurement of the vibration of sound waves. The current international tuning standard is that the A above middle C vibrates at 440 or 442 cycles per second, usually designated as: A=440, or A=442. Sometimes Hz is added after the numbers.


Pitch, in music, position of a single sound in the complete range of sound. Sounds are higher or lower in pitch according to the frequency of vibration of the sound waves producing them.


This means that the notes below A=440 all have a lower pitch, while the notes above A=440 have a higher pitch.

Tune is putting your instrument to a certain pitch/note. For example, the low string on a 6-string guitar is tuned to E. A tuned gong is one that is made to hold a specific pitch/note.


What Does This All Mean For Gongs?

While most gongs are not tuned, that is made to resonate at a specific pitch on the Western scale, like A, Bb, or F#; they do have a fundamental pitch that they ring at. Striking directly in the center will bring out the fundamental pitch. Especially in flat gongs (Chau, Wind, Heng, your basic Paiste style, etc), this pitch may be somewhat obscured by any number or overtones/harmonics that ring out above the gong's pitch. This is especially true as you strike the gong more towards the edge. Depending on how each gong is played, and what type of mallets are used, different overtones/harmonics can be brought out. 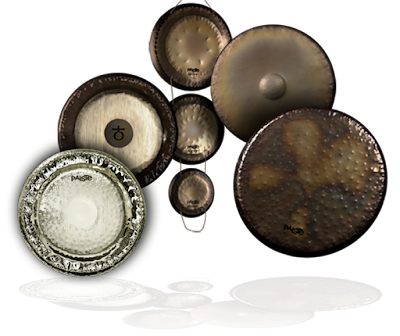 A selection of Paiste flat, and 1 bossed, gongs.

A gong with a raised center boss, like a Gamelan gong, can be tuned to a specific pitch/note, as the shape of the gong suppresses overtones. Striking the gong on the raised boss will result in a strong fundamental pitch, while striking near the edge will add some overtones, but nothing close to the overtones you would get on a flat gong.

2 Bossed Gongs from my collection.

I hope this short explanation helps clear up these terms. Of course this is only scraping the surface of tuning and overtones.

If you've enjoyed reading these blogs, please consider a donation. Thank You ~ MB.