February 13, 2016
If you hang out on Facebook with the same group of people I do, the the chances are that you were involved in, or at least aware of and read through, a recent massive posting & multiple threads about the Planet Gongs, their tunings, Hans Cousto, and whether any of this is right, wrong, or even matters. 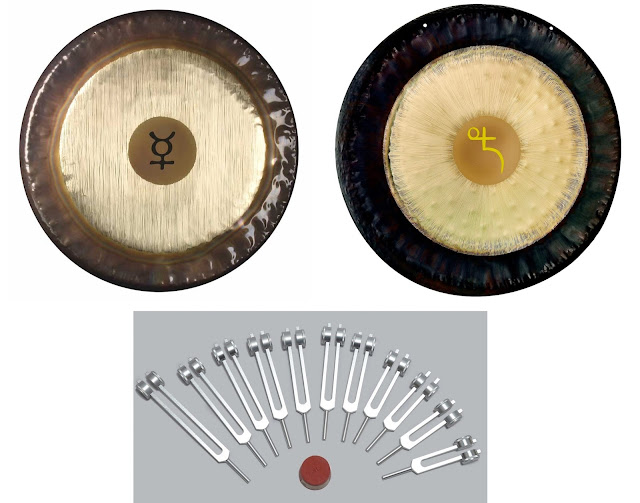 A selection of planets

The Plan Of The Planets

This all lead to bringing in the mythology that lies behind the Planet Gongs, like Chiron being the wounded healer, Jupiter being about expansion, or Venus embodying the feminine aspect. Many ideas and strong opinions were tossed about. Some people base their whole life & work on the Planetary Gongs and their tunings, having derived elaborate systems that they work with. Others don't really buy into any of this and pay little or no attention to the mystery & mythology. Still others fall somewhere in between the 2 poles.

It's no secret that various companies have promoted the Planetary mythologies as a way to sell Gongs, tuning forks, singing bowls, and other instruments. As a species, we tend to like stories. Look at all the books out there full of stories. So it's no surprise that sellers of these instruments would promote them that way. It's also no surprise that the new age/spiritual/yoga/guru type crowd would go for these stories full on. Truth be told, this crowd is all about stories as a way of understanding their lives and the world around them.

The Promotion Of Snake Oil and Other Items

I think it's important to say that I like stories too. In fact, I'm also a writer, having written my share of stories over the years. Tonight, I played a gig where I performed on Gongs, bells, and other metal objects that also included stories I had written for each piece of music I played. It was a multi-layered performance where I incorporated music, works of art, and told stories. So I'm into stories.

While I do have rituals and certain ways that I do things, when it comes to the music, I'm all about the music. For example, I have a Jupiter and a Venus Planet Gong. I bought them and use them because I really like the sound. They could be called red & blue Gongs, or tree & grass Gongs, or Lucy & Ricky Gongs for all I care. When I buy any new gear, I don't really pay attention to what the labels are, or what the descriptions of them are. I let my ears and my mind and my body decide what they are. The 1 question I ask is: does this sound work for me, work for my music? If the answer is yes, then I buy it. If the answer is no, then I pass and go on to something else. It's as simple as that. No dogma. No mythology. No sales stories.

Your World Is Your Own Illusion

If you've gotten this far, you know I have strong opinions, but it's also important to know that I don't think my opinions are any better than anyone else's. I also don't think other people's opinions are dumb, wrong, or ridiculous—they are just theirs. It's a big world out there with room for everybody's ideas and opinions. And the thing is, we each interact with this world based on our own personal experiences. My life is very different from yours, so we may have completely different ideas about things, and that's OK. Our experiences that form us are different. The way our senses and nervous system respond to stimuli is different. And our beliefs based on all the input our brains receive is most likely different in many ways.

Another important thing is, I'm a trained percussionist with over 40 years of experience, so I always approach the Gongs from that perspective. I can't help it, because that is me at the core. I know many Gong & bowl players are not percussionists, or not even musicians who play other instruments. Many people have no musical training at all. So their perspective and approach will most certainly be different than mine. In all of this, I am no better or worse than someone else, just different. While I approach much of what I do intuitively, that is all tempered by my very pragmatic and logical side. So even in the midst of surfing the vibrations and moving between worlds, I'm still thinking about my grip, my mallet position, and how I'm striking things. That's just me.

So in conclusion, believe what you want, follow the myths and stories you want (or none at all), and realize that others might have different ways of doing what you do, but it's all good.