July 04, 2019
Yes, this post is a few days late, but It's been an intense past 3 months for me, and Tuesday night I just needed to get some sleep so I would be fresh at 8:30am for my session.

Shawn's a big guy who makes BIG Gongs. While he makes all sizes, 40-60" are his specialty. His 60" Gongs tower over the presentation room. While he's only been making Gongs for a few years, he's made steady progress is really dialing in the sound. His Gongs are expressive, as well as artistic. 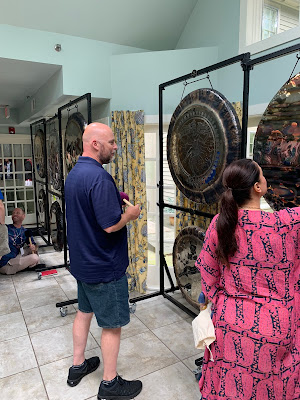 Shawn helping with a Gong selection. 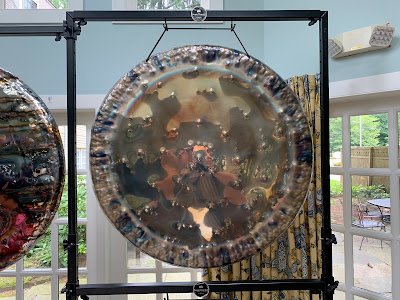 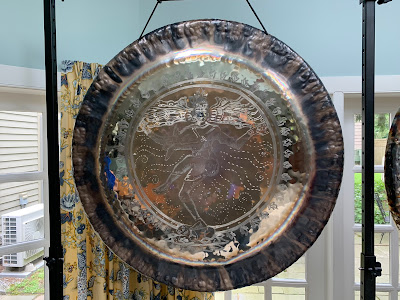 The mirrored finish makes it difficult to get a photo of the stunning artwork. 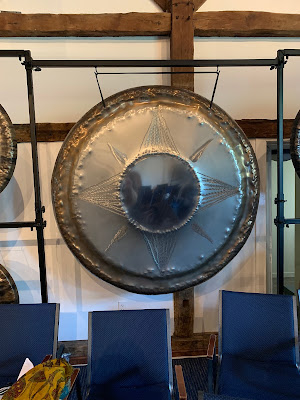 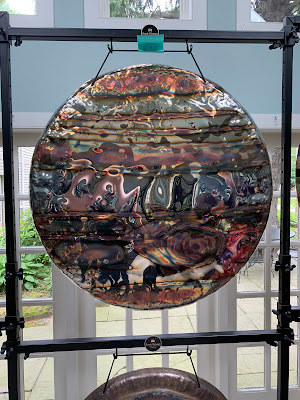 Have you ever seen anything more beautiful than the art of Shawn's
Planet Jupiter Gong? It sounds as good as it looks. Stunning!

Day 2 started off with Mitch Nur presenting a history of the Gong. His research drew on various ancient books and documents, as well as interviews with people around the world. There's so much misinformation on the Gong and it's origins. Mitch has worked hard to sift out the the facts, trying to get a detailed timeline of the Gong's origins and evolution. His power point presentation gave us much food for thought. Mitch Nur laying out the history.

In the 2nd part, he looked at the modern history of the Gong as a meditative/theraputic device from the 1950's on to the present day. This part looked a the lineage of the various players through the last 60 years. One of the important ideas of the Summit is to get the facts out there and help establish a lineage, so we all know where we have come from, in order to move forward.

The 2nd Masterclass was supposed to be Sanj Hall from India. Unfortunately, the State Department decided, at the last minute, to deny visas to the people coming from India. This was disappointing, but everybody rolled with it. Instead, Mitch gave a presentation based on Gong technique and sounds. No one complained, as Mitch is always entertaining.

The night's panel discussion was on Gong Craft. Gong makers Grotta Sonora, Shawn Aceto, Jim Doble, and Ryan Shelledy were featured. Each had a chance to talk about their work and ideas. The panel delved into the idea of Gong making and took questions from the audience. 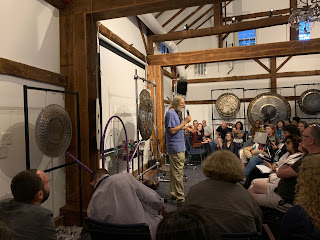 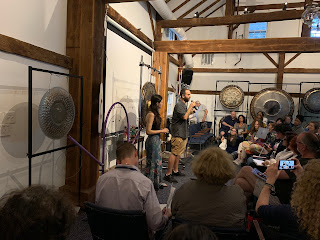 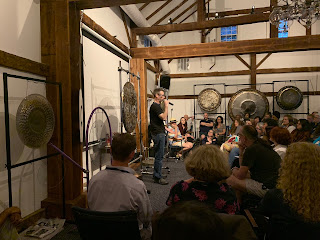 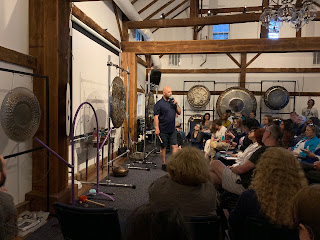 It was a very full day and I needed to get some sleep before my Wednesday session.