July 07, 2019
Day 4 and the energy level is still high. Everyone seems to be riding a wave of euphoria. And why not? There are Gongs everywhere and the vibrations are flowing. I'm tired, but the sheer energy in the air keeps me going.

Who is this Teutonic madman????

No one is prepared for the morning Master Class presented by Jens Zygar from Germany. Jens brings a blitzkrieg assault of the Cosmic Octave that leaves everyone stunned in their seats. 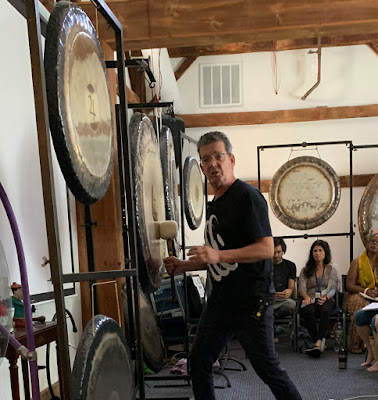 Jens telling me, "Michael, don't use your thumb!"

Jens brought an intense sense of humor to his presentation. But he also shared a lot of knowledge about the idea of the Cosmic Octave and how it works and fits into our lives. He certainly cleared up some misunderstandings I had about the system.

He also demonstrated a beautiful way to approach the Gong and play it, which brings you into the Gong and its sound. I have more work to do when I get home.

Mike drove to the summit as part of his east coast tour. He brought his large set up of Gongs, bells, and bell plates. The opening of his session was a long soundscape that explored texture, melody, and rhythm. He kept a deep drone going on the large Gongs while playing melodies on his small tuned Gongs, bells, and plates. His music was beautiful and moving. 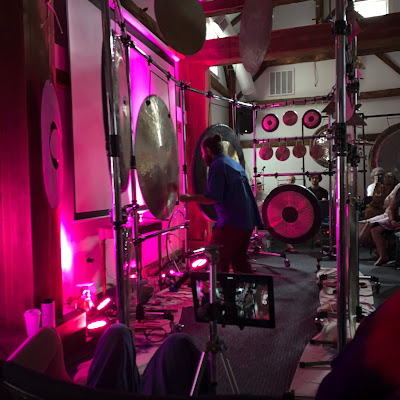 In the next part, he explored different elements of music by having audience members participate. He explored rhythm by having 13 people stationed at a Gong, move a simple additive rhythm (play 1 note, then 2, all the way up to 8 notes) moving from player 1 to 13 and then back again. 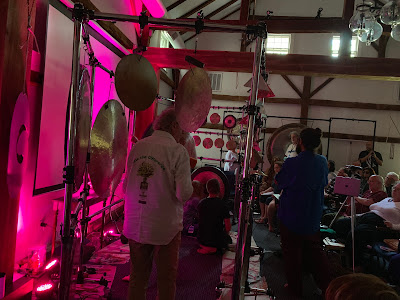 He also passed out small tuned Gongs to people and then called out note names, having people put together short melodic patterns. Then he added people playing another melodic layer on top, to create some interesting interlocking sounds and rhythms. It was interesting to see how much the players enjoyed exploring these concepts.

The evening again featured a relaxing Gong session, and a drum circle on the back deck, where the frogs joined in.

There's more to come on the final day.