After 2 days here in Hobart, I finally got the chance to perform. While it was nice to have time to just hang, I came here to play, and playing was on my mind. I'm usually not much of a breakfast eater, but I went down to the hotel restaurant and had a big breakfast. I had the feeling I would need the energy. When playing festivals like this, sometimes it's impossible to grab a decent meal during the event.

Because I had been out to MONA yesterday, I was familiar with the layout, which made things so much easier. The transport shuttle dropped me off at the green room, where I grabbed some needed bottled water, and then I made my way to the Barrel Room, the sight of the day's 1st performance. This was the time I also got to meet the Gongs I would be using. Between the Gongs Paiste had so generously provided, and the Gongs from Brian Ritchie, the festival's curator, I had a nice selection to choose from. This was both a rarity and a delight. It was so great not having to travel with my large Gongs, dragging them through airports, or worrying whether they would arrive intact.

So I sampled the sounds and chose what I thought would work well together. It's always a challenge using borrowed gear because you're never sure how it's going to react. Gongs are very personal, and I've developed an intimate relationship with mine. I know how they will sound and respond in any given situation. Sometimes borrowed gear can throw you off, or if you are lucky, it can offer something unexpected that will bring you to new musical territory. I got lucky. 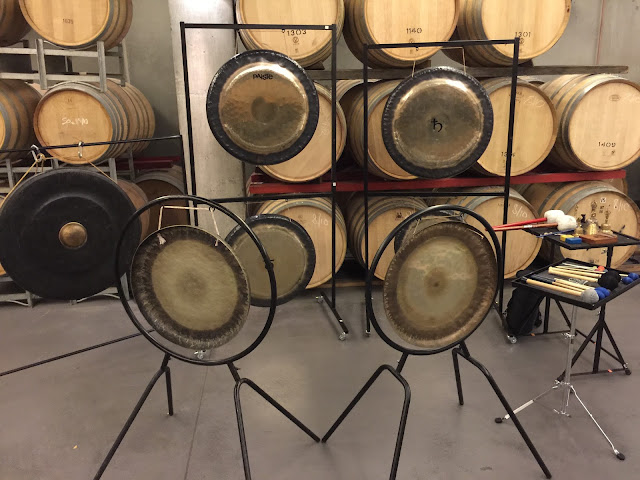 After yesterday's tour, I wasn't quite sure about the acoustics of the room. It's a rectangular concrete room, more like a bunker than anything. Fortunately, I was able to hear the percussion duo, the fantastic Ensemble Offspring (featuring the very talented Bree Van Reyk & Claire Edwardes), play the set before me. The room was lively, but didn't have that dreaded harsh reverb/echo sound. I attribute this to all the wine barrels on the racks. The wood soaks up many of the reflections, and the round barrels don't allow for flat, reflecting surfaces. So the effect was much like a nicely baffled recording studio.

The luck I ran into was these particular Gongs and how the room reacted to them. The 32" Symphonic & Saturn are just enough out of tune with each other to produce a significant deep beat pattern when played together. This was enhanced by the acoustics of the room. As I played, they created a deep throbbing, much like a large engine idling. The 36" Gamelan Gong seemed to be at the room's resonate frequency. When I played it, it was like an omni subwoofer, with the sound seemingly coming from everywhere. To say both of these sounds/effects were fantastic, would be an understatement.

The best part of this is that I was able to get a deep, throbbing pulse going for most of my performance. I was able to time things and play around with this pulse. The Gamelan Gong produced a nice beat pattern that worked for me to feel in 5.

I had so much fun playing that I didn't want to stop. The room was packed and the people very responsive to the vibrations. It was one of the most satisfying performances I've ever had. Afterwards, I did a quick interview session, then packed things up to be transported into town for my next performance at the Brook Street Pier.

While the Barrel Room is a very cool and damp climate controlled room, which I found quite comfortable to play in, the Brook Street Pier was another beast altogether. This is the boat landing for the ferry between MONA and the downtown area. The “stage” area was crammed into a corner at the front of the building. One of the things about the building is that it's almost all glass, which is great for having a nice view of the water front and the city, but not so great if you are performing with the hot summer sun blazing through the windows.

Whereas I was nice and comfortable in the Barrel Room, I was not here. The sun heated everything up: me, the Gongs, and the black wooden floor I was standing on in my stocking feet. I had difficulty playing because I had difficulty thinking. The heat was so distracting, and I was seriously worried about getting heat stroke, because of course, I was wearing all black. 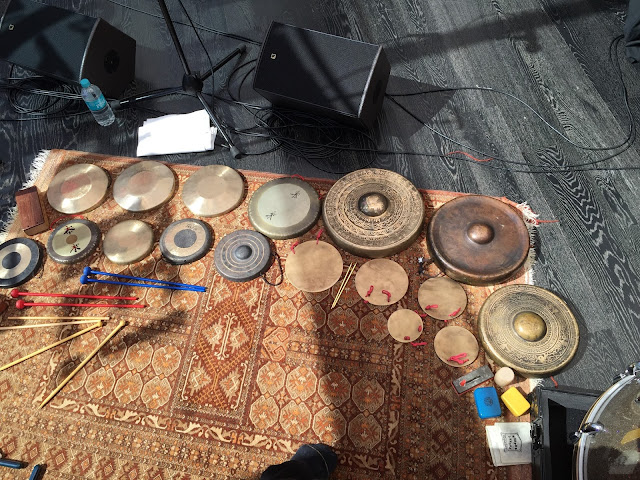 Floor percussion in the hot sun. 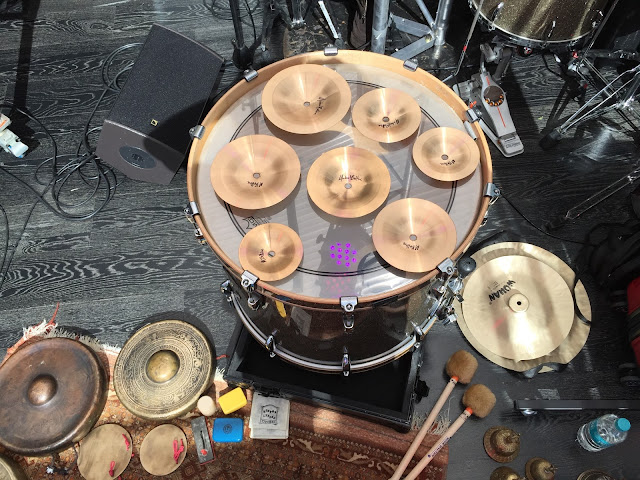 One of the things that happens when you play a festival and send in your technical/gear requirements is that, you usually don't get everything you want. This is no exception. Back home, I use an old 26" marching bass drum that I put a nice REMO Renaissance Emperor head on. This head is nice and resonant, allowing me to do many things, like playing small cymbals & Gongs on top of it, or playing the bass drum like a large frame/hand drum. When they asked me my gear requests, I asked for a large bass drum with one head being a single ply head. If I could get a single ply head, it would most likely not be muffled to death.

They came up with an 18X24 drum set bass drum, which I said would be fine. The problem was, it was set up like a rock bass drum: ported, muffled head on front, and a very muffled pin stripe head on the batter side. Now I hate to be a jerk about things like this, and it wasn't a deal breaker, so I just made the best of it, by tightening the batter head up to get some resonance and response. While not ideal, it was doable. Besides, I like the challenge of making things work. It worked.

Life is too short to get worked up about things like this, and I always remember some of the best advice I was ever given: make the best of your situation.

So here I am in the heat, unsure of where I was going musically. Fortunately, the people were patient and forgiving, as they too sat in the hot sun. While it was not my best performance, I made it through, playing some interesting things and a few new ideas. When it was over, I quickly packed up, so the gear could be transported back to MONA for tomorrow's performances.

Making a mad dash out of there, I walked back to my hotel in the cooler outside air, then threw myself into the shower to wash away any signs of the heat. Later, I caught the shuttle back to MONA to sample some of the other artists, including the festival's headliners, The Flaming Lips.