Towards A New Harmonious Universe: MOFO, Part 5 of 6

January 17, 2016
Another early rise and long day. I caught the 9:30am shuttle bus to MONA for my 1st performance at 10:45. I was invited by Taiko drummer, Yyan Ng, to join his session. Fantastic! We went through everything from ambient soundscapes, to rhythmic pulses, and finished with a fury of double drumming. It took all my stamina to keep up with Yyan. 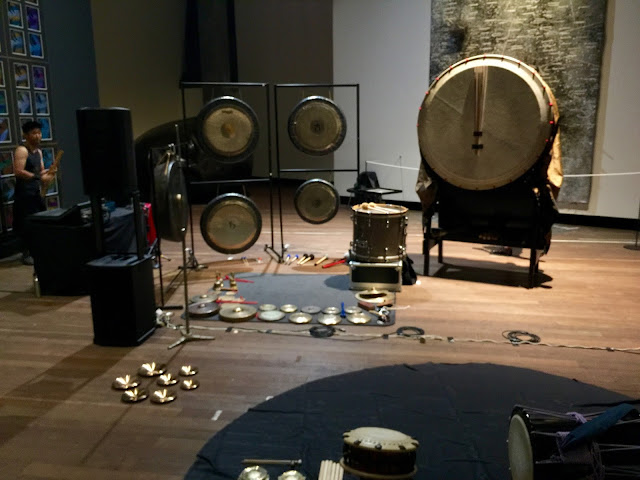 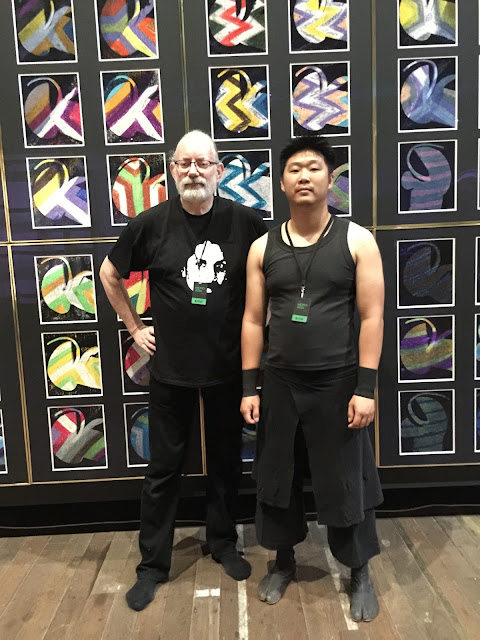 After our performance, with Yyan Ng

It was really interesting to explore such diverse rhythmic territory. Both of us started out as drum set players before branching off into our own things. So there was a common musical language between us. I found it easy to sync up with his playing. And as we played, the music flowed, often with both of us shifting rhythms at the same time. We're already planning on working together in the future.

I then had a little over 3 hours before my next performance, so it was great to get out and see some other artists. This year's MOFO featured drums and percussion and they had an amazing array of players from all over. The next post will be a festival follow up featuring many of the great artists I saw, because you need to check them out.

Performance #2 was with Melbourne trumpeter, Scott Tinkler. What an intense session! Scott has such power. I don't know if I've ever worked with a trumpeter who could put out such sheer amounts of sound. After the morning's Taiko session, I had to do all I could to keep up with Scott. And his sound is so full and clear. I found myself not wanting to play anything so I could just listen to him. But I played anyway, and I played hard. It was like 2 thoroughbred races horses running full out. We just kept going, building things and creating waves of energy to fill the massive room. 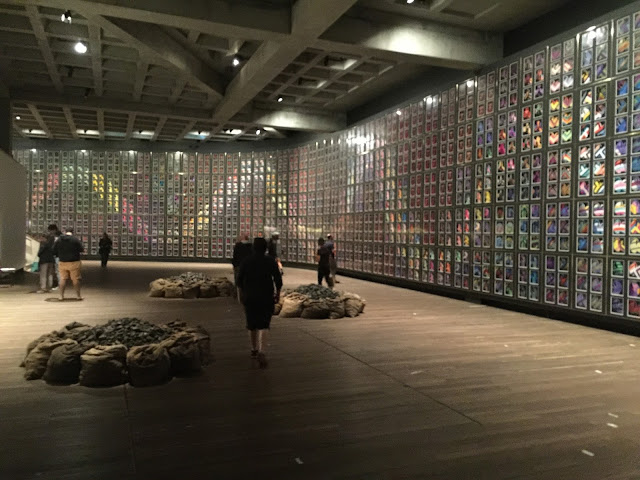 The massive Nolan Gallery, the site of all 3 concerts today.

Performance #3 was an open session where I could play with anyone available. Since it was one of the last sessions on Sunday night,  most of the other artists had already left, but I ran into MOFO curator, Brian Ritchie, while walking around the grounds. He asked me, “How'd you like to play with the best sax player in Tasmania?”  “Sure,” was my quick reply. So 10 minutes before the concert began, I met Danny Healy. While I was excited to play, I was also exhausted from the whole weekend. Fortunately, Danny brought a different energy to things. The music was more relaxed and meditative. He played flute, soprano, and tenor sax. What a gorgeous sound he has! Very full and melodic. I must admit it was nice to have a more relaxed session. I was still challenged, but in a different way. I really tried to be supportive of what he was doing. I wanted to play more melodic/harmonic than edgy and cutting. In the end, it was a great way to end things. 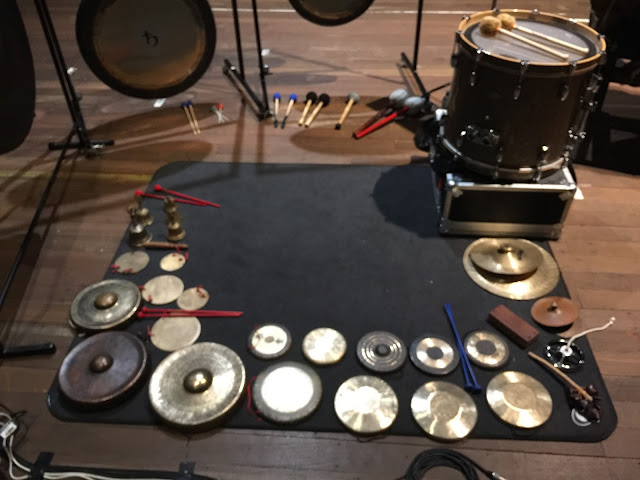 Obligatory percussion photo (it's in my contract)  today's floor percussion set up.

I have to say, I love being pushed, being challenged, having to stretch my boundaries and the limits of my creativity. Being here at this festival has certainly done that. Over three days I played 8 concerts in 5 different spaces. 4 were solo concerts, 3 were duo, and one was a quartet. And none of the music was rehearsed or notated. There were also challenges from playing unfamiliar, borrowed gear. Some gear was sublime, like the Gongs Paiste provided; some was frustrating, like the series of heavily muffled with pinstripe or E-MAD head rock bass drums that I was provided with. But hey, I'm a percussionist, so I can make any gear work.

The audiences were also extremely attentive and appreciative, which pushed me too. I found I had to always be on top of my game. But like all great musical situations, you find that you get back as much, or more, than you put in, and this weekend was no exception. I was pushed and kicked and challenged, but some extraordinary music was made. I found myself playing many things I had never done before, and that's what improvising is all about.

After packing up for the last time, I headed back to my hotel, made a quick change of clothes, and went off to watch someone else perform. As part of MOFO, Dame Evelyn Glennie was giving a percussion recital at the concert hall across the street from my hotel. As tired as I was, and as much music as I had made, I still couldn't help but feel like I wanted to jump up onstage with her and play some more.

Next time, in Part 6, I'll do a wrap up of odds & ends, and spotlight some of the great musicians I managed to see during my downtime.